Pat recently decided that we should look into an induction cooker to try and reduce electricity costs. I played along with this as I am always tempted by new gadgets. I was actually wanting an Instant Pot, but reports and reviews put Pat off as she was worried that the Instant Pot may not be quite up to expectations, especially, for one pot cooking (something I do excel at 🙂).

After looking at hundreds of websites, ads and spec sheets (most are rather useless), we decided on the Snappy Chef as it was one of the few to give the cooking area, and, this cooking area was big enough to take my 12L brew pot! Most advertisers seem to think this is an irrelevant piece of information.

One of the places where we found the device at a reasonable price, was Makro, Centurion. We decided on this particular retailer as it is close, and we could also look at cookware at the same time.

Here, I hope to share my findings after using this device for an extended period of time.

Note: I refer to pots with magnetic bases in this discussion. The base itself is not magnetic, but contains an element (usually iron) to which a true magnet will stick. Magnetism is the energy which drives induction cookers. 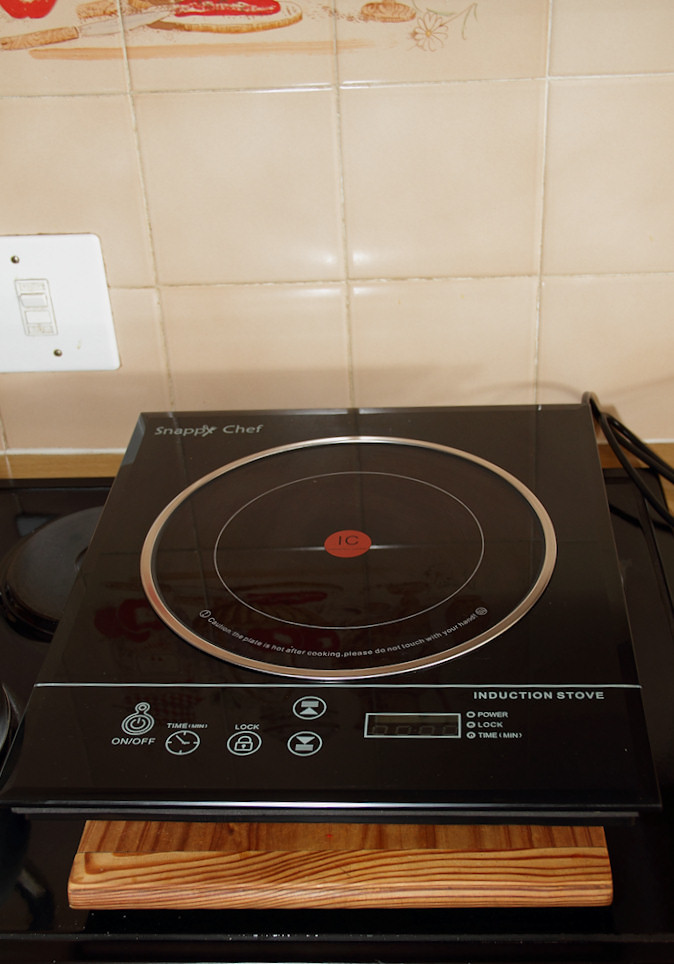 The biggest problem with an induction cooker is that for it to work, the base of the pot (or pan, or whatever container you use for cooking), has to be magnetic. Of all our cookware, we only had one very old pan, a small sauce pot and my brew pot with magnetic bases. This meant an extra cost for the buying of suitable pots.

People seem to think that any ferrous metal pot will be magnetic - this is not true as most stainless steels used for cookware is not magnetic. Pat's old set of AMC pots fell into this unsuitable category (note that the newer ranges of AMC pots are suitable for induction cooking). Fortunately, as I said, my stainless steel brew pot is suitable!

This meant that both of us now carry fridge magnets in our wallets to test whether any cookware we might like, is suitable for induction cooking.

While we were in Makro looking at cookware, we were approached by a young saleslady who told us of a set of Bauer Lite pots, which were suitable for induction cookers, were on special at the time (I see they are still at the same "special" price, 2 months later!). I am not too keen on pots with non-stick coatings (especially the Bauer range) as I have not had too much success with the longevity of the coatings. Some of my older Bauer pots lasted for years, others less than six months. But as Makro only had sets of pots on their shelves, we decided to take the Bauer pots for our test and keep our eyes open for any other pots that might appeal to us. 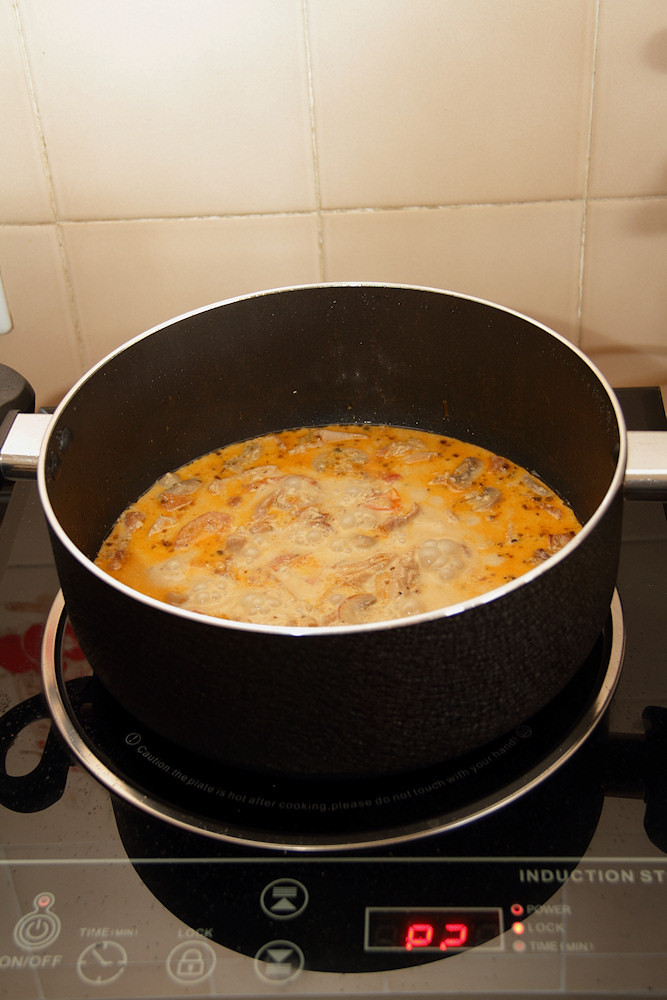 What does not work very well, is cooking eggs in the pan. The cookware has dimples on the base, and for some reason, egg seems to stick between these dimples. This problem is exacerbated if you cook bacon in the pan before cooking the eggs. The dimples on the base of the Bauer Lite cookware

The bits of stuck-on egg does come off very easily, if you add a bit off water to the pan once you have finished cooking. The gunk floats off after a very short time.

When we popped into Makro recently, we happened to be looking at the pans on offer, as I was not really happy with the Bauer Lite pan (especially when cooking eggs), when a Tevo salesman approached us and pointed to the Bennett Read Copper and Rock Pan. I liked the size (the Bauer Lite pan was a bit small) and it had a thicker base (better heat capacity). According to the salesman it was not teflon coated (whether true or not!), but was rated as non-stick. I am very happy to say, this has become my go to pan.

My biggest problem with this pan is that it doesn't have a lid. I have since (27 March 2021) managed to source a lightweight lid (φ=28cm), almost identical to the Bauer Lite lids, which works like a dream. One of the first things that Pat wanted to try and eliminate in the power usage cycle, was the electric kettle. The one we currently have is a 2kW device, and the maximum power usage on the Snappy Chef is 2kW. Being a scientist, I had to test the numbers. Using the small sauce pot as a kettle, I measured the time (with a stopwatch!) that it took to boil 2 cups of water in both the kettle and on the Snappy Chef. Power level 5 (out of 9) on the Snappy Chef boiled the water in the same amount of time as the electric kettle. On power level 6, it is marginally faster, but not worth enough to use the extra electricity. (Unfortunately, I have no idea what the power usage is on power level 5 - I will update, if and when, I find this out.)

Kettles rated for use with induction cookers are unfortunately rather expensive because of their seemingly niche market spot. The ones we could find were all priced at well over R400, so when Pat found a stove-top kettle in Checkers, Brooklyn for R149, which had a magnetic base, she bought it without blinking! It works like a dream - keep that fridge magnet in your wallet! As the kettle does have a tightly sealing lid, with a whistle, it does boil the water marginally faster than in the small sauce pot (which doesn't have a lid).

The web has millions of clever users out there (especially on youtube) telling you how you should be using your induction cooker. My advice is look at the stuff available (if you are so inclined), then ignore it. Use your cooker, experiment with it, and make up your own mind as to what suits your cooking style (and of course your particular cooker) best.

What I want to share here, is my experiences with the combination of the Snappy Chef cooker and the pots I have available. For my cooking style, power level 3 (P3) is my go to setting. I use P2 when simmering stews, but have never been above P4 for cooking (brewing is another matter).

Eggs I want to start off with this, as in my experience (at the moment), this has been the most difficult food item to cook, especially with the Bauer Lite pan.

With the Bennett Read Pan, frying eggs is a dream. I suggest start cooking them on P3, and soon as they have set and are free to move, drop to P2 and flip them if you want. What you do need to do is crack the eggs around the sides of the pan and not in the middle. The middle gets too hot, as the electromagnets are in the middle 10cm of the cooking area.

Make sure your toast is ready before you start cooking the eggs!

Scrambled eggs What I normally do is once I've poured the scrambled egg mixture into the pan is to start stirring I start stirring the eggs almost immediately, and continue until I am happy that the eggs are cooked. With the Snappy Chef (P3), and the Bauer pan, I find I have to leave the eggs to set a bit, almost heading to an omelette consistency on the base, and then to start stirring. If I don't do this, the egg tends to stick between the dimples in the pan. One has to be very careful here, as the eggs may start browning if left too long before stirring. Two minutes seems to be a reasonable time.

With the Bennett Read pan, this is not a problem at all, you can start stirring the egg mixture after a few seconds.

Again, make sure your toast is ready before you start cooking the eggs!

Eggs and Bacon Here, I start by cooking the bacon in the centre of the pan. Once the bacon starts crisping, I start the toast and then add the eggs to the pan, as mentioned above. Once the toast pops, everything is usually ready.

Lazy Man's Omelette This is a recipe where I take a little short cut to get the job done quicker. First, brown the bacon (and anything else you want to cook, such as mushrooms) on P3. While this is cooking, beat the eggs and add whatever you want with the egg mixture. When the bacon has browned to your satisfaction, move them to one side of the pan. Pour in the egg mixture, and let it simmer for about 5min on P2, with the lid on the pan. At this stage, grate the cheese. Once the egg looks as though it has set, add the cheese. When the cheese has melted, fold the omelette.

You are now ready to serve!

Sometime back, Cara gave me a Wonderbag. While this definitely does not cook the food as claimed by the manufacturers, it is useful for keeping food warm. What I do is to allow the stew/curry to simmer on the Snappy Chef for an hour to hour and a half, then place it in the Wonderbag for another hour or so. This keeps the food nice and warm and allows it to blend with the spices. After this, I cook it again at P3 to thicken the sauce.

Fried Fish and potato wedges This has really been great for my one pot cooking. I hate cooking anything at express pace - too often I end up with something raw, so I prefer slow.

First off, I cook the potatoes, in their jackets (who peels potatoes?), in the microwave until they just start getting soft. I then cut them into wedges and cook them on P3 in olive oil, stirring regularly, until they are nicely coated with the oil. I then drop the power level to P2 and let them simmer in the centre of the pan, stirring occasionally until they start browning. I will then add what ever cooked sides on the menu, to the pan (in this recipe mushrooms and leeks), and cook them until they are just about ready.

While this is happening I will make the baste for the fish (and have some beer). For a rather tasteless fish like hake, melted marg/butter with Nando's Mild Chilli Sauce works well.

Make space in the pan for the fish, and paint it with the baste until cooked.

I enjoy using this device, it certainly is quick quick to bring the cooking utensil up to the required cooking temperature.

However, one of the main reasons for buying an induction cooker was to save on electricity - up to now, there has been absolutely no difference in my monthly electricity usage since switching to the induction cooker from when using the electric stove. (Before (n=13): 7.646kWh, After (n=5): 7.565kWh - the values given are a daily average calculated from my "monthly" usage which is sent to the municipality.)

The After value (n=7) has dropped to 7.414kWh, so there may be a slight saving. I will wait and see, especially with winter upon us.

One thing I must note, however, is that the fan is quite noisy if you are used to an electric stove.